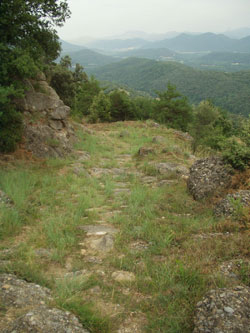 The Roman Way is the path which has been travelled since remote times, practically up until nowadays: in recent years as a path for livestock and before that, as the only way of passing from Bianya to the valley of Camprodon, in other words, communicating the plane with the Pyrenees.
And so, it seems that the Roman Way of Capsacosta has Roman origin, being a secondary branch of the Via Augusta, the great axis of communication that united Rome with Cadiz, crossing the Pyrenees.

The only well preserved section in the whole of the Roman Way of Capsacosta, runs between Sant Pau Vell, within the municipal boundaries of Sant Pau de Seguries-Ripollés and el Pas dels Traginers, in the Vall de Bianya-Garrotxa, with a total length of 8 kilometers.

Along the route you can contemplate the stone paved sections of the Way, plus elements directly related with its construction, such as draining, quarries, bridges, water banks, hostels...

The Via is considered to be a cultural treasure of national interest. Therefore, you can stroll through 2000 years of history along a path that conceals enchantment yet to be discovered.
Tuits de @DeBianya